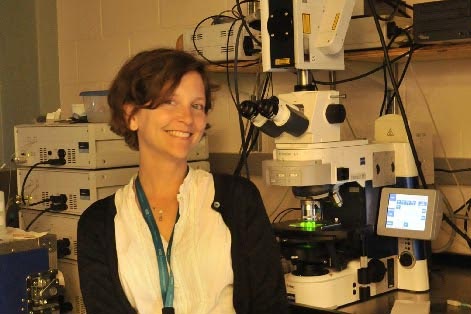 
Different areas of the brain attain their unique characteristics by controlling how cells divide and what types of cells are generated. Neural progenitor cells (NPCs) are the brain’s proliferating cell population and they have two major potential fates: to divide symmetrically and generate two NPCs, expanding the pool of progenitors, or divide asymmetrically and generate a new NPC and a differentiated cell. In the visual system of Xenopus laevis tadpoles, changes to the animals’ visual experience significantly alter cell proliferation, but the mechanisms that induce NPCs to switch their fate are not clear. One main difference between NPCs and neurons is whether the cells use mitochondria as their energy source. In the proposed experiments, I will use in vivo time lapse microscopy to investigate how mitochondria are regulated in order to produce experience-dependent changes in NPC proliferation and neurogenesis. Commonly, NPCs are extracted from the brain and studied in isolation where they are divorced from their cellular environment. By conducting experiments in the intact brain these results may reveal insights into experience-dependent mechanisms that control NPC fate and provide a greater understanding about how neurodevelopmental disorders arise.