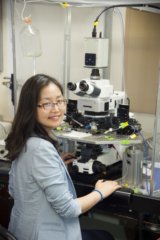 
The cortex and the thalamus are intricately coordinated to modulate sensory information. All sensory inputs, except for olfaction, are passed through the thalamus and the characteristic ability of thalamic neurons to switch between tonic and firing has been suggested to play a role in sensory modulation before transmitting sensory signals to the cortex. Of the two firing modes, altered burst firing has been repeatedly implicated with pathological pain condition, which suggests that maintaining a certain form of thalamic bursts could be crucial for controlling pain. Moreover, results of a thalamic stimulation study have shown that electrical stimulations mimicking specific elements of the naturally occurring bursts were important in producing an anti-nociceptive effect. It also suggested that the anti-nociceptive effect may occur via the recruitment of cortical inhibitory interneurons, but actual activation of cortical inhibitory neurons or the type of interneurons recruited by specific burst stimulations has not been directly demonstrated. Therefore, the current study proposes to directly investigate the relationship between cortical inhibitory interneuron activity and thalamic burst stimulations utilizing the slice patch recording technique. Results of the proposed study is expected to determine part of the cortical network involved in the action mechanism of nociceptive signal modulation occurring by thalamic burst stimulations and may possibly offer a therapeutic target for pain control.