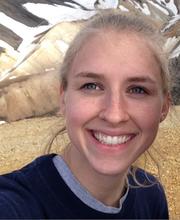 
Hardcastle used a combination of cutting-edge computational, theoretical, and experimental approaches to probe how the brain encodes navigation, revealing how boundaries, rewards, and running speed can influence coding properties of neurons in the entorhinal cortex to support spatial representations. She demonstrated that grid cells — neurons in the entorhinal cortex that encode the distance an animal has traveled — are calibrated based on sensory input, a paradigm-shifting idea. Next, using machine learning algorithms, she was able to study responses in the vast majority of entorhinal neurons, many of which had never been classified. She found entorhinal neural responses are unexpectedly diverse and dynamic; representations are not fixed, as previously believed, but adapt based on the animal’s behavior or location of a reward. She also performed electrophysiology recordings on rats navigating different environments to show that entorhinal representations change depending on the navigational strategy used, unlike the fixed maps we use to navigate. Together, her work led to a new understanding of the diversity and flexibility with which the entorhinal cortex supports spatial navigation.